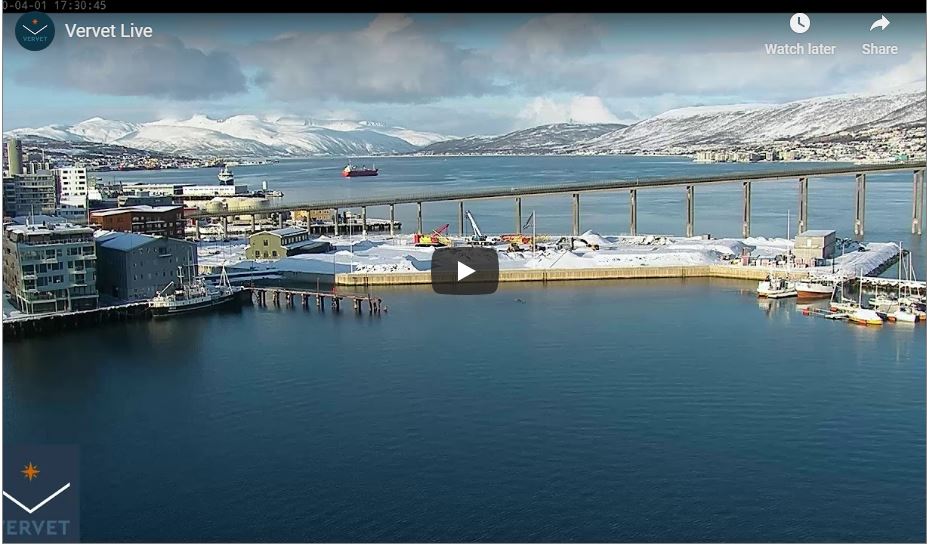 Tromsø Port live cam, is the largest fishing port in Norway. Secondary to fishing, the University of Tromsø is a center for Arctic research. Tourism has exploded as an alternative economic resource after Joanna Lumley featured the city in the BBC special “Joanna Lumley in the Land of the Northern Lights.”
The compact city centre has the biggest concentration of historic wooden houses north of Trondheim, and they co-exist with modern architecture. The houses date from 1789 to 1904, when building wooden houses was banned in the city centre, as in several other Norwegian cities. The oldest house in Tromsø is Skansen, built in 1789 on the remains of a 13th-century turf rampart.

Arctic Cathedral in Tromsø
The Polar Museum, Polarmuseet, situated in a wharf house from 1837, presents Tromsø’s past as a centre for Arctic hunting and starting point for Arctic expeditions. Tromsø Cathedral, Norway’s only wooden cathedral, built in 1861, is located in the middle of the city, and so is the small Catholic church Vår Frue (“Our Lady”). Northern Europe’s oldest cinema still in use, Verdensteatret, was built in 1915–16. The cinema has large wall paintings, made by the local artist Sverre Mack in 1921, which picture scenes from Norwegian folk lore and fairy tales.