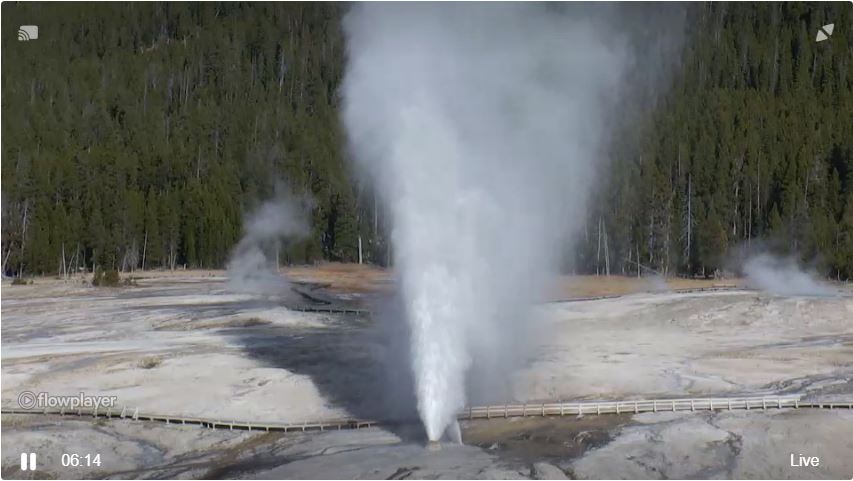 Prior to 1904, Waimangu Geyser, in New Zealand, had some taller eruptions capable of reaching 1,600 feet (490 m), but in 1904, a landslide changed the local water table, and since then, Waimangu has not erupted. Excelsior Geyser in Yellowstone’s Midway Geyser Basin, and Semi-Centennial Geyser just north of Roaring Mountain on the Grand Loop Road were reported to be as tall as Steamboat, both with eruptions reaching 300 ft (91 m). However, Excelsior has not erupted since 1985, and now functions as a hot spring, and Semi-Centennial’s one eruption of this height was reported in 1922 and has been dormant since.

Steamboat’s major eruptions generally last from 3 to 40 minutes (a couple of durations surpassing an hour were observed during the 2018 active phase), and are followed by powerful jets of steam. During these eruptions, water may be thrown more than 300 feet (91 m) into the air.[7] Steamboat does not erupt on a predictable schedule, with recorded intervals between major eruptions ranging from three days to fifty years. The geyser was dormant from 1911 to 1961. In 2018-2019, the geyser entered a prolonged period of frequent activity with more than 40 eruptions reported in a one-year period.

After an eruption, the geyser often vents large amounts of steam for up to 48 hours.Sometimes during this part of an eruption, water may return to Steamboat, causing it to jet water once again, though to lesser heights. Cistern Spring, located nearby, will drain completely following a major eruption of the geyser; the spring refills within a few days.