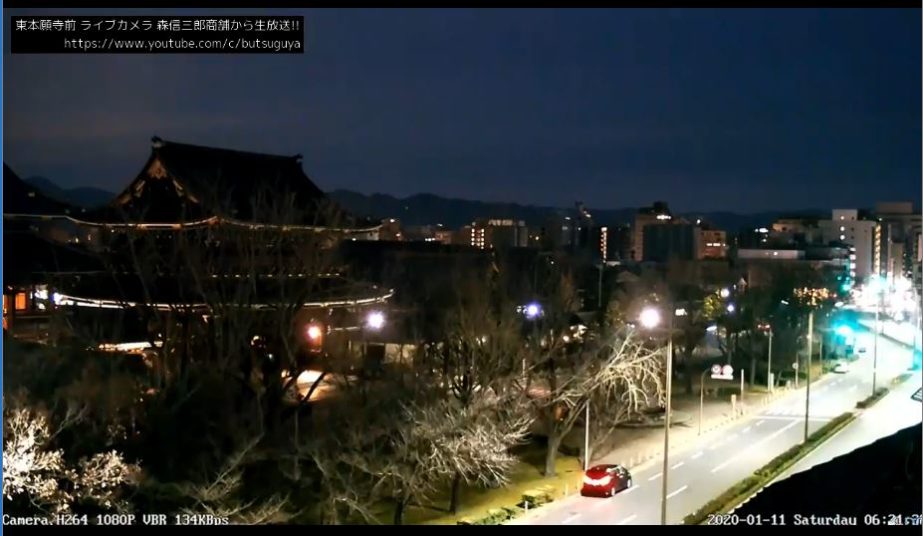 Higashi Honganji Temple Live Webcam, Higashi Hongan-ji (東本願寺), or, the Eastern Temple of the Original Vow, is one of two dominant sub-sects of Shin Buddhism in Japan and abroad, the other being Nishi Honganji (or, ‘The Western Temple of the Original Vow’). It is also the name of the head temple of the Ōtani-ha branch of Jōdo Shinshū in Kyoto, which was most recently constructed in 1895 after a fire burned down the previous temple. As with many sites in Kyoto, these two complexes have more casual names and are known affectionately in Kyoto as Onissan (お西さん, Honorable Mr. West) and Ohigashisan (お東さん, Honorable Mr. East).

Higashi Honganji was established in 1602 by the shōgun Tokugawa Ieyasu when he split the Shin sect in two (Nishi Honganji being the other) in order to diminish its power. The temple was first built in its present location in 1658.

The temple grounds feature a mausoleum containing the ashes of Shin Buddhism founder Shinran. The mausoleum was initially constructed in 1272 and moved several times before being constructed in its current location in 1670.

The Amida Hall to the left of the Founder’s Hall contains an image of Amida Buddha along with an image of Prince Shōtoku, who introduced Buddhism to Japan. The hall is ornately decorated with gold leaf and art from the JapaneseMeiji Period. The current hall was constructed in 1895.