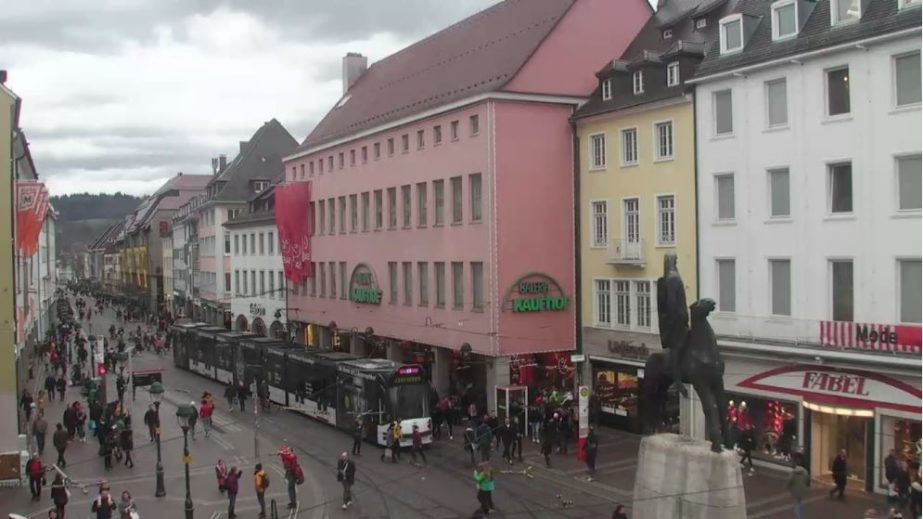 A vibrant university city in southwest Germany’s Black Forest, is known for its temperate climate and reconstructed medieval old town, crisscrossed by picturesque brooks (bächle). In the surrounding highlands, hiking destination Schlossberg hill is linked to Freiburg by a funicular. With a dramatic 116m spire, the Gothic cathedral Freiburg Minster towers over the central square Münsterplatz. The HD live webcam is located in the heart of Freiburg im Breisgau.

Because of its scenic beauty, relatively warm and sunny climate, and easy access to the Black Forest, Freiburg is a hub for regional tourism. In 2010, Freiburg was voted as the Academy of Urbanism’s European City of the Year in recognition of the exemplary sustainable urbanism it has implemented over the past several decades.

The longest cable car run in Germany, which is 3.6 kilometres (2.2 mi) long, runs from Günterstal up to a nearby mountain called Schauinsland.

The city has an unusual system of gutters (called Freiburg Bächle) that run throughout its centre. These Bächle, once used to provide water to fight fires and feed livestock, are constantly flowing with water diverted from the Dreisam. They were never intended to be used for sewage, and even in the Middle Ages such use could lead to harsh penalties. During the summer, the running water provides natural cooling of the air, and offers a pleasant gurgling sound. It is said that if one accidentally falls or steps into a Bächle, they will marry a Freiburger, or ‘Bobbele’.